Devil Came Through Here Wiki
Register
Don't have an account?
Sign In
Advertisement
in: Locations, Locations in Downfall

“In my dreams I visit this place. The only one that never changes. My escape. My Quiet Haven.”

Quiet Haven Hotel is the main location of Downfall (2016), it is an old country hotel located in England, United Kingdom.

The elevator is the only means of reaching all floors in Quiet Haven, as the stairs to upper floors aside for the first floor are blocked off. Although the elevator is not accessible until Joe has answered the phone on the ground floor that starts ringing after talking with Young Sophie.

However, the fourth floor is still inaccessible until the player has accessed the floor through The Queen of Maggots' house.

The ground floor of the hotel is the first location Joe will arrive in and contains three main rooms; a foyer, a dining room, and a kitchen. The foyer has a receptionist desk for checking in and the elevator and stairs leading to the upper floors. The magnet required to obtain the key to Sophie's room is located here.

The dining room is a large eating hall that serves mostly dead guests wearing severed animal heads (plain masks in the original game). The door to the kitchen is also located here where Sophie's smoothie recipe must be prepared and also leads to a large freezer room where meat is stocked.

The second floor of the hotel contains Room 101; Joe and Ivy's room, Room 102; Young Sophie's room, and the Twilight Lounge and, unlike the other floors, it can be reached from the ground floor without the elevator. The Twilight Lounge contains a large mirror which Sophie has imprisoned Ivy in.

The first part of Ivy's letter is found in Room 101 after answering the phone on the reception desk.

The second floor is a long hallway with several locked guest rooms. It has luggage scattered about, a cigarette vending machine, and a long corridor with windows that whispering can be heard in. Dr. Frank Zellman's room; being randomized to be either Room 201, 202, or 204, and Room 203; Harrison's room, are located on this floor.

Agnes is first encountered on this floor, her body laid out on the examination table in Doctor Z's room. The second part of Ivy's letter is also found if Joe listens carefully to the whispering heard midway through the left hallway long enough.

The third floor contains a function room for holding parties and meetings to the left of the elevator and a restroom to the right. There is also an entrance to a hidden room located next to the painting of the lady in a hat.

Function Room A is the location of a birthday party held for the second memory of Sophie who is upset about her unrequited love for Harrison. The party is private and can only be accessed with an invitation. The bathroom contains the third memory of Sophie as well as many other dead variations of her and a secret room sealed behind a bathroom wall that contains the recipe to Sophie's smoothie.

The third part of Ivy's letter is found in the hidden room behind the painting.

The fourth floor is the last floor of the hotel, being inaccessible until much later into the game as a piano is blocking the elevator. This floor has a large, distorted hallway with doors placed in awkward positions to the point of most of them being inaccessible.

Room 401 is located next to the elevator and leads to an outdoor area with Joe and Ivy's dream home and harbors the final memory of Sophie. There is also the Manageress's office and an unusable fire exit that presumably leads to the ground floor.

Room 666, the door of which having the number printed across the front of it several times, is located at the end of the distorted hallway and is normally inaccessible. During the course of the story, it's used as a one-way door leading into the hotel from two locations, The Queen of Maggot's house and the Manageress' secret room.

The Fifth floor is an unofficial floor of the hotel. After Joe has saved Ivy, all the buttons in the elevator are replaced with a button to the fifth floor.

This fifth floor ends up being Joe's apartment, which leads into Doctor Z's room.

The basement is accessed from the stairs leading to the first floor, however the door is locked and can only be unlocked with a key from Doctor Z. It seems to serve as a storage area, and has a hatch on the floor that leads further down into what could be another lab, containing a shelf that stores several poisonous solutions and a seemingly haunted corpse.

In the original Downfall, it is mentioned several times that the unnamed town Quiet Haven is located in is in the English county of Devonshire. In Downfall (2016), however, it's just referred to as a "(cheesy) country hotel," with no confirmed location given. 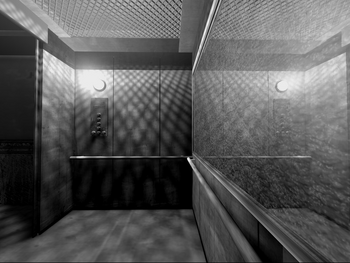 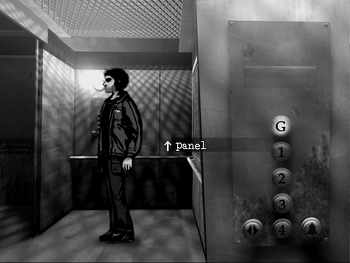 The elevator, on the Ground Floor. 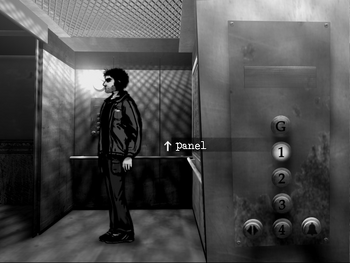 The elevator, on the First Floor. 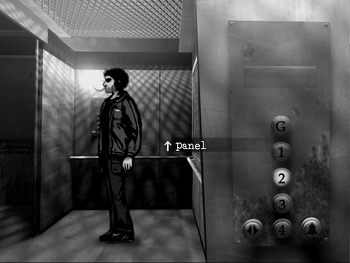 The elevator, on the Second Floor. 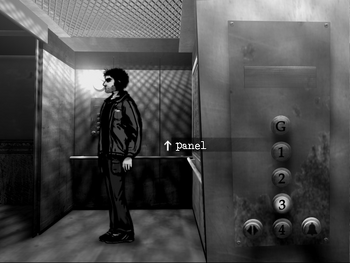 The elevator, on the Third Floor. 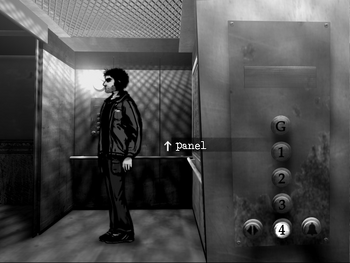 The elevator, on the Fourth Floor. 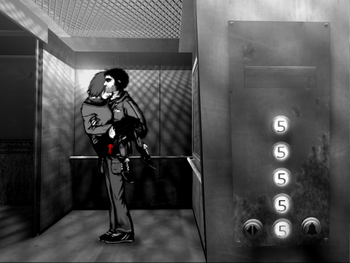 The elevator, with all the buttons replaced with a button going to the Fifth Floor.
Community content is available under CC-BY-SA unless otherwise noted.
Advertisement